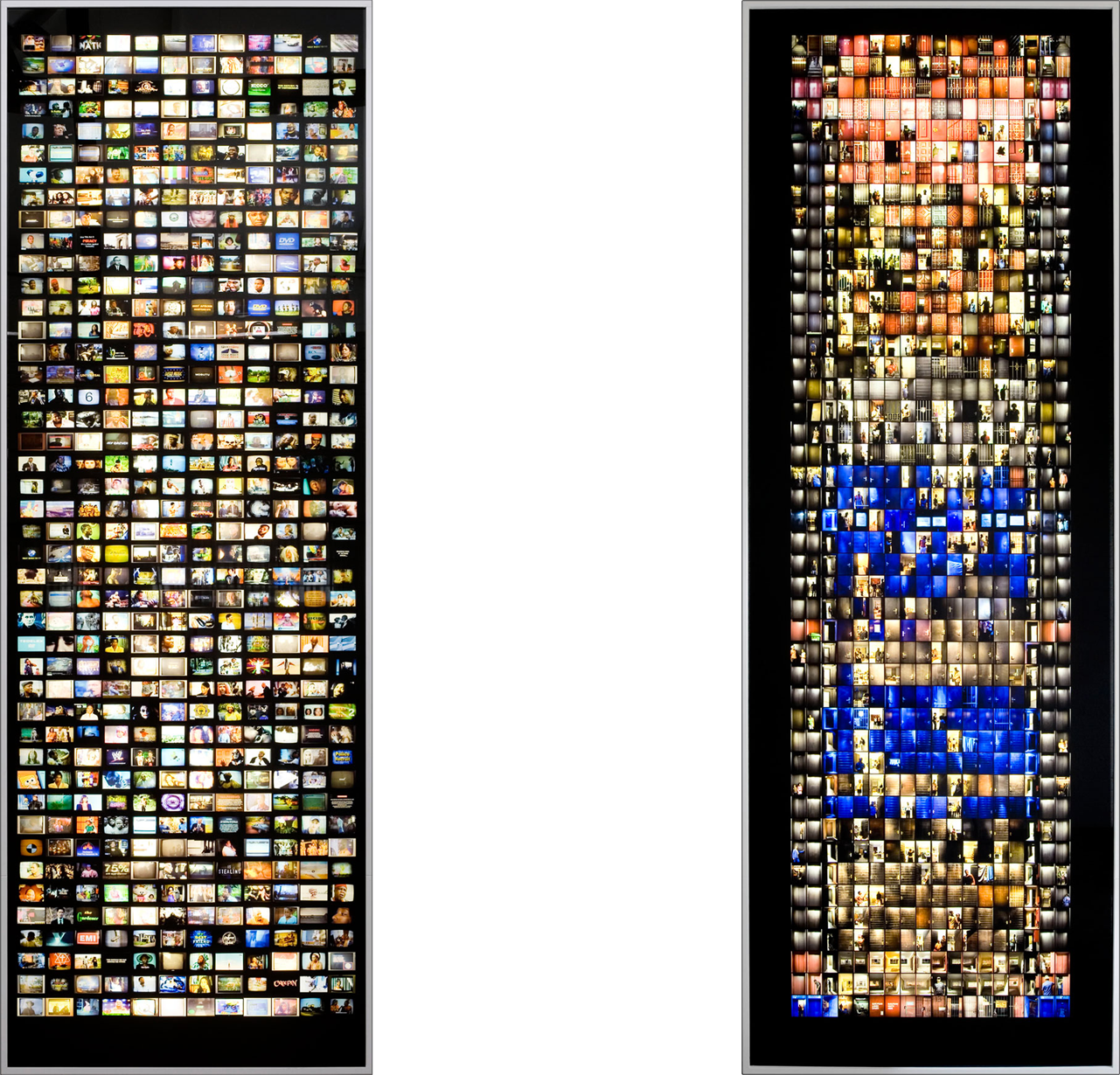 I wish I could say that seeing Mikhael Subotzky and Patrick Waterhouse's monumental lightbox installations Televisions, Ponte City and Doors, Ponte City at the NGA was a worthwhile experience. Unfortunately, the massive lightboxes, each one reproducing hundreds of tiny transparencies, made no impression on me. I looked at them, scrutinized several of the minuscule individual images, looked at the whole of the piece again, and decided that there was nothing to be gained from giving them any more attention. They were just one more generic photo installation. Underwhelming would be an understatement.

My friend walking in front of Doors, Ponte City was more interesting than the art istelf. In fact, if it weren't for the photo I posted two days ago, I wouldn't even know the titles of the lightboxes. Hell, I wouldn't even remember seeing them—they were truly a non-event. It was my own need to give an accurate title to Woman At boringartwork that meant I had to know the titles of the boringartwork in question.

A couple minutes at the NGA's website furnished the information and I went on with my day.

Except I couldn't shake the feeling that I knew Ponte City from somewhere. I knew the name at least. And there was a story too. I just couldn't remember it.

Ponte City, stuck on a wall and ignored.

And big. They were at least twelve feet tall and they had a wall all to themselves, so hang on a moment while I revise those last four paragraphs to bring them inline with the actual experience:

Ponte City. The outline of the story had come back to me: white flight after the fall of apartheid, years of neglect, serious decay, rampant crime, and a failed redevelopment; but I wanted details. So I stood on the edge of 65,000,000 search results and dove in.

If it had been a swimming pool, I would've broken my neck. Midway down the first page, I found Subotzky and Waterhouse's essay on the project. I don't normally read what artists write about their own work—most of the time I finish with less respect for the art then when I started and no respect for the artist. I read it. Couldn't make me think any less of the work, now could it? The history, at least, was informative. The spoonfed explanations and insecure self-justifications at the end were typical art-world bullshit.

But the essay is really secondary. With Subotzky's website in front of me, I wanted to see the rest of the project. The first thing I found was the three Ponte City lightboxes: Televisions, Doors, and Windows.

Windows, which the NGA either doesn't own or chose not to display, is the most interesting of the three. It also brings the other two together. It's a short step from door to window or window to television, but it's a leap to go straight from door to television. Even with the added structure, though, I wasn't impressed by the lightboxes at all. The size makes the images illegible, the transillumination turns them into little billlboards, and the piece as a whole is three incomprehensible slabs of technicolor tedium.

There was also a book mockup. Seeing actual images from files, rather than photographs of backlit transparencies changed the photos. They were cooler, calmer, and deeper. The transparencies were so flat, so hyperactive, and so ugly with that yellow light blasting through them. The photos were also different images, not a selection of lightbox images. Portraits to start with, all shot in an elevator, all directly engaged with the subject. They didn't appeal to me, but it was work with obvious quality.

Then there were the windows.

Or rather, a window, run double truck, across the gutter. A man silhouetted on the left. Johannesburg before him. Blue sky. A single black cloud. An orange curtain bunched up on the right with a sliver of sky between it and the edge of the frame. Good color. Good tone. Good composition. Good mood. Good photo.

The next spread was four-up, two pictures per page, and that first photo was the top-right image. The next spread was 16-up, 8 pictures per page, and again, the previous spread was reproduced in scale. Then 36-up, 18 per page. Then 144-up, each image barely the size of a postage stamp, but all still perfectly legible. That first shot was the key to the second spread. That second spread was the key to the third spread. As the images shrunk on each successive page, they remained legible because they were always anchored by a larger, richer, easier to process image.

Then there were more photos that weren't part of the lightboxes. Advertisements. Found objects. Quotations. Hallway shots. Courtyard shots. Context. Meaning. Variety. Then the televisions, presented exactly as the windows had been. One, then four, then sixteen, and so on. Then more individual photos, then the doors, presented going from many to few, then more individual photos. There were 207 pages, and I looked at every single one of them at least twice.

Steidl have published Ponte City, a boxed set with a hardbound book of photos and seventeen saddle stitched pamphlets of supporting essays and material. I have no idea how close it is to the mockup on Subotzky's website. It's $70 from Amazon, which is far too expensive for me to buy on whim, and indeed, far too expensive to buy unless I love the photos to death. I am, however, going to look at it in person. I'll even attempt to read the essays. None of the local libraries have it, so I'm going to have to make a trip into to town and make an appointment to read it at the NGA library.

When the Ponte City photos were presented as grids of homogenous images turned into monoliths of gaudy backlit plastic, they were nothing, not even a collection of snapshots. When the photos were given space to breathe, when individual images were singled out, when there was a sense of place and time, when there was context, the Ponte City project acquired meaning and emotional resonance. Enough resonance that I'm going to spend a good hunk of my day going into town just so I can look at the book that came out of it.